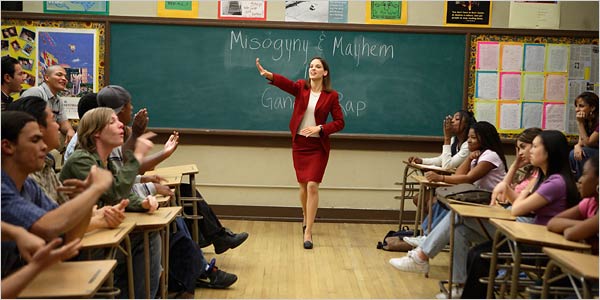 Freedom Writers is one such movie. I rate it at 4/5.

The movie left me with that very important thought which needs constant replenishment. That there is more to Life than worrying about oneself.

The film follows the true life story of Erin Gruwell, a freshman and sophomore year English teacher at Long Beach who, when faced with the onerous task of managing a class waiting to be ripped apart by inter-racial hatred, is “foolish” enough to believe she can bond them, forge them as one and make them seek their true potential.

Hillary Swank is a fine artist. I fell for her in “Boys don’t cry” and again in “Million Dollar Baby”. In this movie she does a good job of etching the character of Ms. Gruwell. But that is not what makes this such a fine film. The actors playing the students have their moments of greatness. But that again is not what makes the movie what it is.

For me, the movie is great because of the dialogues, closing remarks to conversations and the telling spaces. To prove my point, I would like you to watch for the kid who reads out from his diary at the “Toast for Change” occasion. His words moved me. They sure did. And I was crying and laughing in one moment of human bonding. I have seen kids like that and I know what he was talking about. And unless you’ve lived with your eyes closed, there is a fair chance you’ve seen kids like that too.

The story of a school teacher struggling to manage a class refusing to behave is not new. But how does that make another good film on that topic any less good? It’s like I have hugged my mother many times in the past, but how does that make it any less lovely to hug her once more? Some people need to be hugged as frequently as we can. Some stories need to be told (and heard) as frequently as we can.

Reviews of the book “The Freedom Writers Diary” can be read here.