This past Sunday I went in search of the Ganesh idol that appealed most to me. Ambling through the crowded bylanes of the old city area, I came upon many forms of how the Lord is seen by his worshippers. What surprised me was the sheer scale of democracy in the visualisation. There were no two similar idols. Each devotee had and took the liberty to see Lord Ganesh in his own image. Hinduism, for all its ritualistic baggage is, even today after 5000 years, like a young religion ready to experiment. While I cannot comment on how spiritual the devotees are, what can be concluded safely is that this joyous freedom will ensure Hinduism stays around for another millenia.

Early in my assiduous two hour search, I came upon a Ganesha sculpted as a young, go-getter 19 year old. Mounted on a snazzy bike and ready to vrroom into your heart. Perched right in front was a photographer to take a shot of your kid out on a ride with the most worshipped Hindu God. I waited until the next kid was propped onto the pillion. 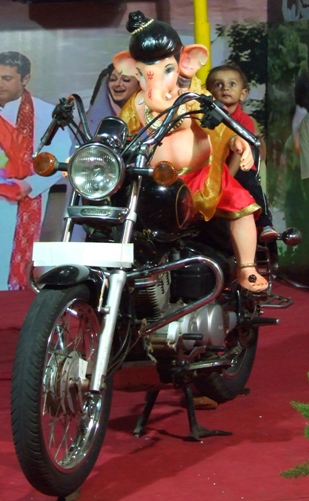 Wonder what the kid is looking up at. Maybe praying for a safe ride?

There was some more that I received, courtesy my S6500fd bridge camera. And that was instant attention and hurried clearing of the front deck so that I may take my shot. Which left me feeling a little guilty. But then who knows, maybe Ganesha willed it such. What an attention grabber he is – nothing short of a film star!