“Dadi, amaye ekta golpo shonau”1, I would say with that killer smile which only a child can generate. Dadi, I knew, aside of her protests was as eager for our story time as I; and what followed made ‘Lord of the Rings’ look like amateur. The great Indian curry in my case had talking tigers, flying carpets and the occasional ogre. And so every Sunday we created a world of our own, impervious to the unromantic world around us. I considered it a rude joke on God’s part that she was not my age because then I would have married her and relished a story every hour! I told her of my thoughts and she lit the air with her dry chuckling saying that I would not have made a better husband than the one she has. This hurt me enough and I envied ‘Mr. Dadi’ for quite some years. Though we never met, I sure had him resemble some conspiring devil in my mind!

She was my queen, my queen from Godabanda. What was it like in Godabanda I would ask every once in a while and never receive an answer. This unknowingly was pure rhetoric, for an answer I never did wish to get. Godabanda (I deduced for myself) must be the place where all her stories transpired. That set me up for a visit to this mysterious village where reality took a backstage. “Godabanda ta mane ki” 2, I asked one ingenuous afternoon, sure of receiving another mindful dose wild imagery. I was enlightened with the information that, long time back, a gallant prince had once roped his blue steed here (the rest I calculated as such; “Ghoda” = horse and “bandha”=tied). The missing ‘h’ must have been a victim of the local dialect. That night I dreamt of ‘h’ as a miserable waif mercilessly butchered by a dragon. My imagination ran amuck after every frenzy of ‘smartness’. And in this case I walked vaingloriously for many a passing day, secure of my superiority due to this exquisite piece of information. 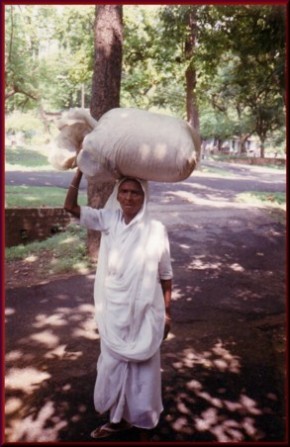 She fed me in the more worldly sense too. Well actually, she sold ‘mudi’ (puffed rice) for a living. I never liked it much but was caring and gallant enough not to refuse the bowlful that she offered on each Sunday. I considered my silent suffering highly matured and had no doubts that this would easily qualify me as worthy of some monument! She was a million things to me at the same time. Imagine the curiosity it created in my friends when I proudly displayed Dadi’s rakhi every year. A rakhi from a wrinkled old lady on the virgin wrists of a seven year old?

Her wrinkles were like some purposeful makeup that she adorned. They remained adamantly and magically unchanging since the earliest of my recollections. My sister, who was my elder by some twelve years, reiterated my observation. And she knew Dadi before I was born! It was as if time had left its footprints all over her, hiding its secrets in the precipices of some grand canyon (and then forgot all about it). She told me that they were her earnings and I nodded happily, thinking she must be very rich even though she looked the contrary. The fallacy of this would dawn on me many years later.

Our affair continued for another three years and we never missed a ‘date’, except once when I was down with jaundice. Then school got in the way of my ‘education’ (Mark Twain surely had a similar childhood to warrant like thoughts about school and education). Slowly science and social studies perverted my mind with their knowledge. I started to realize that manliness and my relationship with Dadi did not go well together. We still met every Sunday but the unassuming love was tarnished for once and all. My smart mind got the better of a simple heart. She understood this better than me but was not stoic enough to prevent the pain from reflecting in her eyes. In the days that followed, and for the first time in many years, I felt that her wrinkles were increasing. Time had returned to end her reverie.

The pangs of growing up in my case thus revolved around a wrinkled old woman. Dadi was my first name for her and it remained so, neither of us caring for the frivolity of a name that her parents might have conjured up many many years ago. “Godabanda ekhanthake kauto door?” 3 I once asked and she replied “teen kose” 4. That left me dumbfounded and I continued staring at her as if she were some incarnation. As children we would mark out our kingdoms (much like animals) and most of our time was spent inside these imaginary walls. School too happened to be within walking distance. My world was marked by a one kilometer circle, though, occasionally my father would ride me away to far off places on his bicycle. So, her answer left me in a state of uncontrolled imagination. It seemed Godabanda was at the end of the world. What proved to be the icing to my imagined cake was the fact that she was always barefooted (and her clothes as unchanging as the wrinkles). What kind of courage would it require from a wrinkled old lady to walk thirty kilometers every day with a sack of rice on her head? I voiced my question and her reaction left me puzzled. She laughed the question away but her naïve eyes belied the sorrow beneath. Her visage registered clearly into my mind and so, that evening, I approached my father with my predicament. His initial reaction was that of surprise and what followed was to change forever my relationship with Dadi. Carefully (and delicately) I was explained the monetary aspects of living and by the end of the discourse I knew what needed to be done.

The next Sunday, I offered my piggybank with its curative treasures to Dadi and remarked that she no more needs to sell mudi. This tore her apart and tears welled in her eyes; unknowingly mourning the death of our affair. Things were never the same again. I was now party to a dark secret of hers. A secret she had kept me insulated from as if she had anticipated its poison. She lost her natural flair, aware of her poverty and maybe the loss of her wealth when she was with me. That night I dreamt of me as a dragon scorching sunflowers in a beautiful garden.

We drifted apart after this episode. She visited our neighbourhood less, limiting visits to the odd Sunday. My interests wandered and I lost the attachment, burdened by the vagaries of the hurried world around me. I did not have time for a slow and old wrinkled lady anymore. On more than one occasion I had somebody lie to her that I was not at home. The reasons for such impudence escaped me, was it my embarrassment or the fear of a hounding guilt that I had murdered her world? A world where time had stopped for her.

Many years later, when I chanced upon a dish of ‘mudi’, something snapped deep inside. I had an uncontrolled yearning to rush into the lap of Dadi and then ask for a story with that killer smile which only a child can generate. Time had returned to hand me my childhood joy, the difference being that there was no Dadi to share it with.

Godabanda is a small village on the South Eastern outskirts of Jamshedpur; a city in the state of Jharkhand in India.

Rakhi – an Indian tradition wherein a sister would tie a thread on her brother’s wrist and he in turn would vow to protect her from any harm.

1 – Grandma tell me a story

3 – How far is Godabanda from here?

One Response to “My affair with the Queen of Godabanda”