The 2014 General Elections (aka 16th Lok Sabha Elections) in India will be the world’s largest democratic exercise ever with approximately 814 million registered voters. I ran a word cloud analysis of the manifestos of the three most talked about political partys in this election – Aam Aadmi Party, Bharatiya Janata Party, and Indian National Congress. This post presents the word clouds but no analysis. A subsequent post will analyze the “message” from the clouds and the message from subjective aspects of each manifesto, such as cover design and chapter headings. Finally, if time is available, I hope to write a post (or a series of posts) on key sentences in each manifesto. The links to the manifesto from each party immediately precede the word cloud of that manifesto.

In each word cloud presented below, the font size for a word or phrase represents the RELATIVE occurrence frequency of the word or phrase in the manifesto of its origin. That is, the word that occurs most frequently in the manifesto has the largest font size in the cloud. Thus, when comparing between clouds, any two words having the same font size, have the same, or nearly same, relative frequency in their respective manifestos. The absolute occurrence count follows each entry in parentheses. 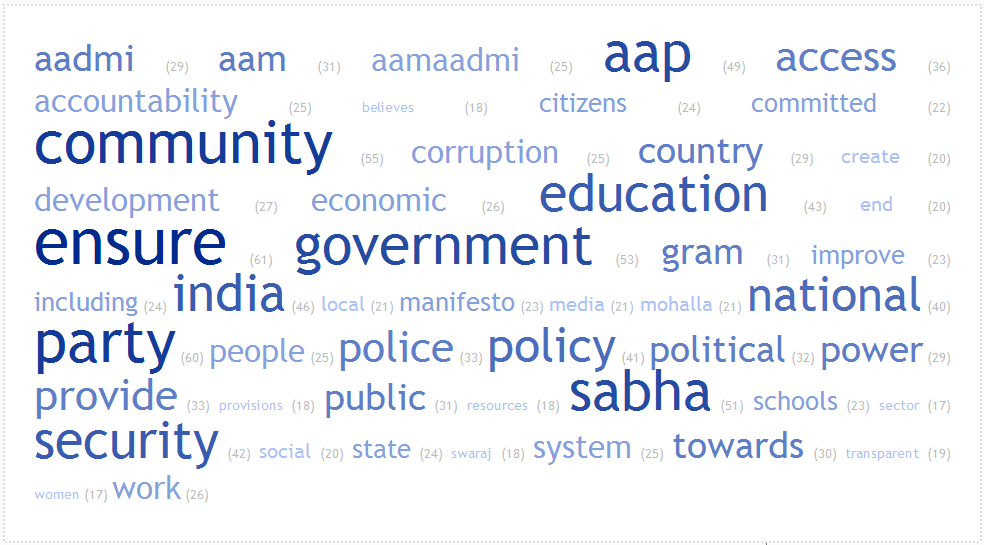 By the way, this is the first political post on this blog. I did not realize that until I found I did not have a category tag called politics (and thus created one especially for this post).